"It is important that students bring a certain ragamuffin, barefoot irreverence to their studies; they are not here to worship what is known, but to question it." ~Jacob Bronowski

50 States and Where to Find Them 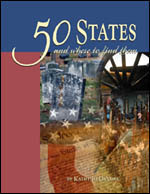 My primary intention behind writing 50 States and Where to Find Them was to teach my children all the states and capitals. This is accomplished by tackling the United States region by region. Children fill out a map of the region as they learn about each state. State lessons include historical information about the state and coloring pages of the state flower, state bird, and state flag. Each region wraps up with a crossword puzzle, a word search, and a bonus lesson pertaining to the region. Bonus lessons include topics such as heraldry, the Erie Canal, and the Underground Railroad.

Because I believe that literature makes all subjects better, reading suggestions are also included. Four of Holling C. Holling’s classic books travel each region with us, deepening our studies. F. N. Monjo’s The Drinking Gourd describes traveling cross country by watching the stars, and also provides an important lesson on civil disobedience. 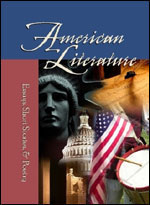 This anthology of American Literature includes all of the essays, short stories, and poetry suggested for grades six and seven in Andrew Campbell’s The Latin-Centered Curriculum, plus a few of my own personal favorite American short stories.

This would be an excellent addition to any study of American literature and history.

The Legend of Sleepy Hollow by Washington Irving

Scarlet Stockings by Louisa May Alcott

The Outcasts of Poker Flat by Bret Harte

The Raven by Edgar Allan Poe

The Fall of the House of Usher by Edgar Allan Poe

The System of Dr. Tarr and Professor Fether by Edgar Allan Poe

The Celebrated Jumping Frog of Calaveras County by Mark Twain

The Private History of a Campaign that Failed by Mark Twain

The Gift of the Magi by O Henry

The Ransom of Red Chief by O Henry

The New Colossus by Emma Lazarus

The Lottery by Shirley Jackson

The Short Happy Life of Francis Macomber by Ernest Hemingway

To Build a Fire by Jack London

Everything That Rises Must Converge by Flannery O’Connor